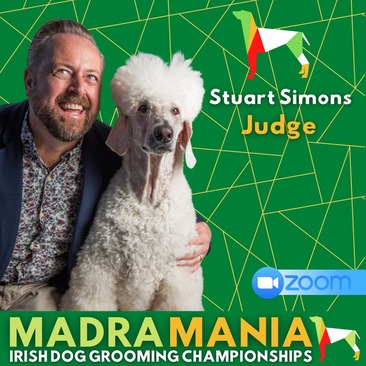 ​Stuart is proud to have been at the forefront of the British Grooming Industry for many years. Having entered it from another creative industry, he recognised comparisons within the two and has worked hard to try to change its public profile from hobbyist to highly skilled by creating The Groomers Spotlight.
In his quest to change the face of grooming and to raise the professional profile of the industry, Stuart has appeared on many TV shows including Jonathan Ross, This Morning, Lorraine, Alan Titchmarsh, Channel 5 News, GMTV, and many more. Stuart has judged and lectured at many grooming shows around the world and specialises in safety within Creative Grooming.
A former Director of Grooming for the BDGA, He is also a fully qualified, experienced and professional groomer having achieved the Open College Network West Midlands and City and guilds Level 3 Diploma as well as being one of only two groomers in Europe to hold the Qualification for Creative Groomers and the only European Groomer to achieve Masters marks in this qualification. This has led to him being the European examiner for the same qualification through the NAPCG.
He has 2 salons in the UK and came to the attention of the press when he dyed Emma Watsons dog pink for a breast cancer charity. He is incredibly proud to be a supporter of education within the grooming industry.
Stuart is the Grooming Consultant for the BBC TV show Pooch Perfect UK hosted by Sheridan Smith. 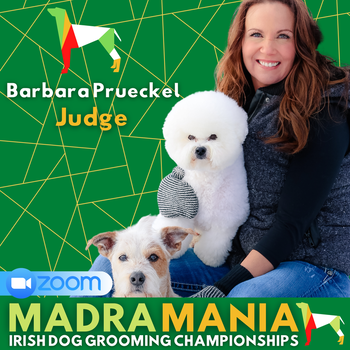 Barb is the owner of Doggie Style Salon in Calgary, Alberta, Canada since 1997. The first ‘invitation only’ grooming salon in Canada.
Some of Barb’s accomplishments include several Gold and Silver medals, Best in show and Best all-around groomer awards at prestigious grooming contests, both in Canada and Internationally such as Intergroom’s International Groomer of the Year, the winner of The World Poodle Tournament in Las Vegas for three years in a row and a gold medalist with her Bichon at the World Grooming Contest in Spain and many more.
She was a member of Groom Team Canada for 12 years, and the captain for 8 years, has been on the European Grooming association’s judges list since 2004, and has been a proud member of the ‘Wahl Extreme Stylist Team’ in Canada for 16 years. She has had the pleasure of speaking and judging in many countries including Brazil, England, India, Italy, Spain, Germany, Columbia, France, Australia, Belgium, Taiwan, Japan, Canada and the United States.
She is the hostess of the annual ‘World Grooming Conference’ in Coventry UK every October.
Her specialty is motivational speaking to her fellow pet stylists. She has given her ‘Ignite Your Passion, Unleash your Potential’ seminar in 6 different countries, helping her colleagues with their self esteem, grooming skills and growing successful businesses.
Barb and her fiancé Mark produce Mastergroom Canada, the largest and most prestigious grooming show in the country every June in Calgary, Alberta. ​
Barb’s passion for the pet grooming industry is immense, and she loves spending time with fellow groomers all over the globe, teaching, learning and sharing. 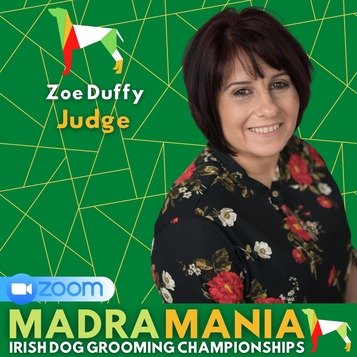 Zoe has been a professional groomer for over 29 years and teaching for 27 years. She has been a part of one of the country’s leading dog grooming training schools, Look North Grooming and Training Centre for most of that time and in 2014 became co director of the Approved City & Guilds Centre, Summit Groomer Training Group.
Zoe prides herself on promoting quality training and education as is a huge advocate for the industries leaning qualifications offered through City & Guilds.
Zoe has won many competitions both in the UK and abroad, major wins being British Groomer Of The Year 1994 & 2005 and runner up 3 times, gold medal Intergroom USA.  Her highest achievement was becoming European Grand Champion with a Bichon Frise at the Oster Invitational Championships 2008 held in Prague.
Zoe is keen to pass on her wealth of knowledge of all this grooming related by hosting educational seminars and demonstrations.  She also judges at grooming competitions all levels of experience, from total novice to champions and Best In Show
For this dedication to the industry, Zoe received the Lifetime Achievement Award at the 2019 industry awards which she was extremely honoured to receive.
Zoe is co-author of the new Dog Grooming book ‘What every Professional Groomer Should Know’. 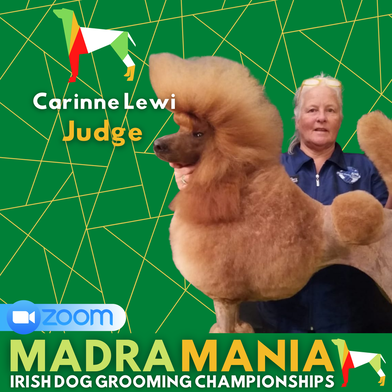 I am originally from belgium. But it's already been 20 years that I have been living in Spain. When I was young I was working with horses, bud A bad burning accident on my feet changed my life....and I started to work as an apprentice for dog grooming when I was 15. My first dog was a Bobtail, old english sheepdog. Later on when I started my first grooming shop I got more interested in poodles. I started with apricot and black standard poodles, under the name: Song of okarina. I won a lot of titles with them on the shows, like world champions, european champions, belgium champions, israelian champion,....Later I also started to compete in grooming competitions, and after a while I started winning there too. Belgium champion, different golden and other medailles.
For almost 20 years I show and breed with Red standard poodles. They also won multiple titles like european and asian champions. They are the love of my life. I just started a new direction in my life with a Poodle grooming school online, on teachable.com . First part is How to brush your poodle. Soon available in english.
I started to be a judge in grooming competitions for different reasons. I wanted to have the opportunity to see how other people groom all over the world and to help where I can when necessary. ​